Pandemic: Fall of Rome is the latest game from the Pandemic series. I was extremely excited about playing this game because: 1.) Late Roman period has always been a topic of interest for me. 2.) It’s designed by Matt Leacock and Paolo Mori (designer of Dogs of War and Ethnos). So, this is way at the top of my list of games to play the moment Z-Man have announced it.

Fall of Rome follows the tried-and-tested Pandemic formula. It is a cooperative game where players collect multi-coloured cards. Once you have enough cards of that colour, you are one step closer to victory. The game ends when the players collected a set of cards from every suit. Simples.

What makes Fall of Rome different from the other Pandemic games is the theme and how it attempts to mesh it with the mechanics. While the other Pandemic games are about stopping the flood or a pandemic, Fall of Rome re-imagines the decline days of the empire, where the super tribes of Goths, Huns, Franks, and Saxons, spewing across the empire like a bottle of Pepsi mixed with Mentos.

However, the game is still Pandemic. What stops you from winning the game is the game itself; and you – as a team – have to cooperate to beat the game. You lose on multiple ways, but there’s only one way to win. Either, on each barbarian tribe, you: make an alliance with them, or destroy them. The alliance feature is new to this series, since you cannot make an alliance with viruses, or the North Sea, or Lovecraftian creatures. I mean, you can try.. but… Already, you can see how the theme permeates throughout this version of Pandemic.

Another thing that Fall of Rome kept is the Outbreak track, which is called the Decline track in this game (or as I like to call it: the Party track). The Party track will increase every time a location has 4 barbarians in it – by definition, this starts a barbarian party. Too much partying and Rome will lose. However, you, fellow Romans, can do partying of your own. Special cards are shuffled into the player deck, and using a special card allows you to do special things, and gives you two options: the normal option (just like in other Pandemic games), or the new party option which is more powerful than the normal one, but the cost is an increase on the Party track. A simple addition, but adds a interesting choice for the players.

One big thing that Pandemic: Fall of Rome have made heads turn is the new combat mechanic. A never-before-seen concept in the Pandemic series. Combat is now an action in the game, where a player can bring along the legions of Rome to fight the barbarians. The combat simply comprise of a dice roll, and could result in the loss of your legions and/or barbarians being killed. In fact, this combat mechanic have replaced the treat action on other games in the series. No longer can you just spend an action to remove a cube, you now have to fight against it.

Recruiting legions to fight for Rome needs a fort for a player to take that action. Depending on how the game goes, determines how many you can recruit; at the start, you can recruit 3 legions, but as Revolt cards keeps popping up, making the situation worse, the less legions you can recruit until you can only recruit 1. 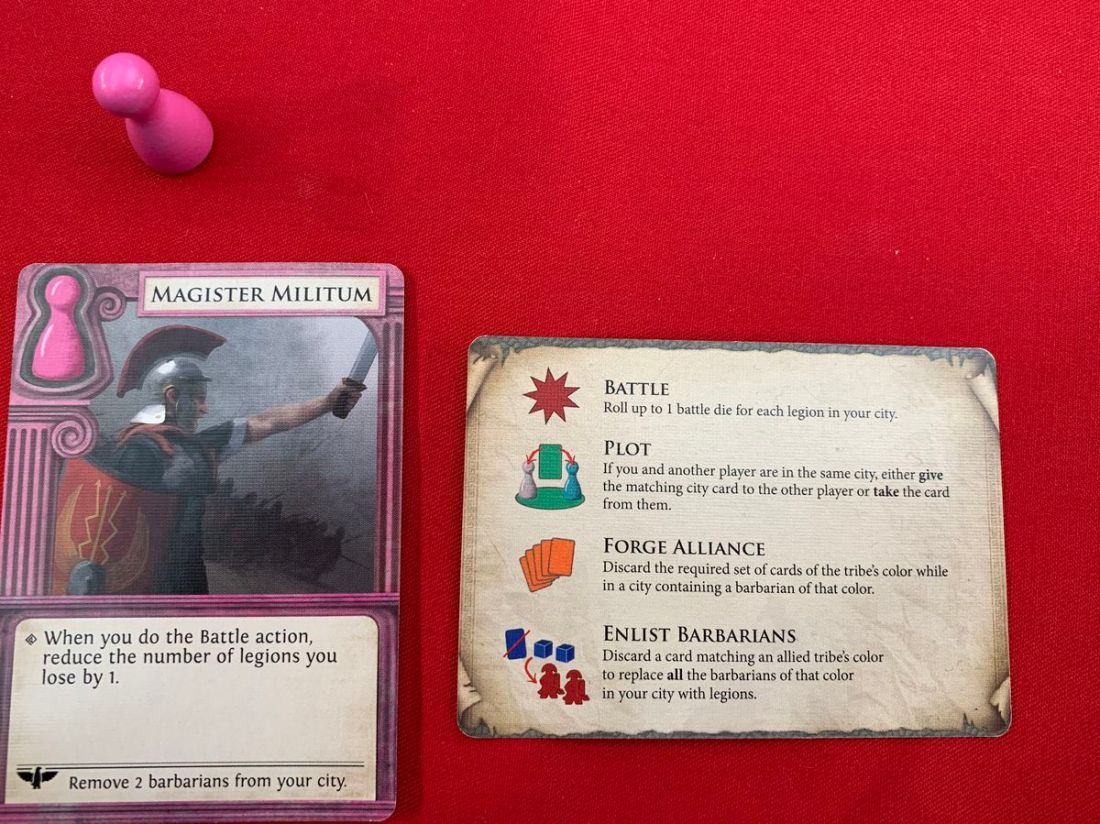 Interestingly, the other way to recruit is to convert allied barbarians into Roman soldiers. This is such a brilliant and thematic design. The more Rome declines, the less legionnaires you can recruit, and the more you rely on barbarians for military strength. And to show the fickle relations between the empire and the barbarians: even after casting an alliance with a barbarian tribe, the tribe still spreads and causing trouble. However, they are indispensable to you, as they are your new source of troops.

This integration of the theme of the Late Roman Era into the design framework of Pandemic made me grin like a madman at the ingenuity of it. We played this game with tension and anxiety as the system is breaking down. The empire’s stability keeps dropping and barbarians continue to dive deeper unchecked, as we kept playing. But we found the light at the end of the tunnel, alliances have being forged, and barbarian warriors bolstered the ranks of our legions. Rome remained standing, for now. We stood and shook hands with my friends and strangers playing with us. We were the 2nd team in the world to beat it at Legendary difficulty (annoyingly, not the first).

My friends and I left the table with grinning smiles and bursting in excitement. But in the end, the game is still Pandemic. I like the series, like how I like ice cream. And each instalments of Pandemic is a different flavour of ice cream. They all taste different, but it’s still ice cream. So, here is what I think:

Can you justify owning this game if you already have 1 or 2 (I only have Pandemic: Iberia), if you are someone like me who wants to keep their collections small and tight? That is a question I am asking to myself right now.

Do you just want a Pandemic game and don’t really mind about the theme? Then, why not? I think Pandemic: Fall of Rome is a brilliant execution by Paolo Mori and Matt Leacock, and a great addition to the Pandemic series.

Do you want a Pandemic game, but prefer a different theme than Rome? Then, I suggest you look elsewhere.

P.S. I am a bit peeved that the Cyprian Plague is not in the game. Oh well, you cannot have everything.

[All images are from Boardgamegeek.com]

View all posts by thelastgameontheleft